Get an inside view into the thoughts of Bella, the lovable golden retriever who might just be the smartest dog in Dogwood Springs!

That evening Libby put an Eagles album on the stereo. From what I’d learned all those years living with Don, it kind of surprised me that she listened to the same music he did. More than once, he’d commented on “that horrible music they listen to these days.” But maybe an appreciation of what Don called the classics was part of Libby being a historian. Or maybe she just had good taste. 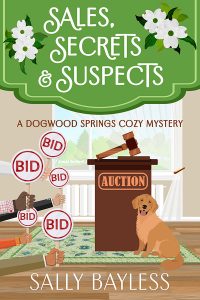 Either way, I enjoyed the music while I ate my dinner. I polished off every bite. Really, dog food is so much better when it’s fresh. It would have been even better topped with some steak, but the vet had told Libby, “Bella should only eat dog food.” Utter nonsense. And Libby believed him. I loved her dearly, but sometimes she was too much of a rule follower.

After I finished eating, though, I noticed something was up. Earlier in the day, Libby had been to the groomer—I mean the hair salon. And now she seemed extra concerned about her clothes.

Luckily, being a dog, I don’t have to worry about clothes. Libby brushes my fur frequently, so I always look good.

After a few minutes, she turned off the music and sat on the couch. Her shoulders slumped, and she let out a dramatic sigh. “Oh, Bella, this is a mistake.”

I trotted over to her and licked her hand. Whatever was worrying her, I was here. I could cheer her up.

But then the doorbell rang.

My heart leapt. A visitor! Had she invited someone over, and that was the ‘mistake’ she mentioned? People were never a mistake. Whoever it was, I couldn’t wait to be their friend.

Libby shouldn’t answer the door with that frown, though. I gave an encouraging woof and galloped over to the door, eager to see who all the fuss was for.

Finally, after what seemed like a week, she opened the door.

“Hi,” said the guy on the doorstep.

Well, well, well. I’d been around the dog park enough to know a potential mate when I saw one. But was he worthy of my Libby?

“Thank you. It’s great to see you too.” She had a note in her voice that indicated she might have already decided he was acceptable. “You—”

I wiggled past her and gave his leg a good sniff. Okay, he passed that test. My initial assessment was that he was a decent human, but I needed more information. I rubbed my head against his leg.

“Bella, stop. You’ll get hair all over Sam’s pants.”

That was the idea. The last thing Libby needed was some persnickety guy who’d get upset over a little dog hair.

But wait! He’d knelt down and was saying hello to me.

A good start, buddy, but now it was time for the ultimate test. I licked his cheek, making sure to mess up his perfectly groomed hair.

Trust me, Libby, I’m doing this for you.

The guy ran a hand along my back. “Aw, aren’t you the best dog ever?”

I dipped my head modestly. Good of you to notice. I’ll give you a few bonus points for insight.

He stood and grinned at Libby. “You didn’t tell me you had a golden retriever! We had one when I was growing up. He was my best friend.”

Excellent. An endorsement from a fellow golden retriever. This guy was looking better and better. But how would he respond to the hair issue? So far, he hadn’t seemed to notice.

He gave an awkward shrug. “I wasn’t exactly the most popular kid. More like the school’s super-geek.”

My pulse picked up. If he was a super-geek, that meant he was smart. Maybe he could get the message about the fireplace that Libby and Cleo had missed.

“Bella is a sweetheart.” Libby gestured toward the door to our apartment. “I’ve only had her for a couple of months, since I moved here. Come on in and let me get her settled before we leave.”

I galloped over to the fireplace and looked back at the guy.

He gave me a quizzical look, then followed me.

As soon as he got close to the hearth, I began barking. Loudly. Surely, he’d be smart enough to understand that someone had planted a bug in the fireplace.

I ignored her and kept barking.

“I think there’s a squirrel up there,” she continued. “It’s almost like every person who comes into the apartment, she has to warn them.”

Sam leaned down and looked me in the eye. “Big bad squirrel?”

My heart sank, but I barked louder. Not a squirrel, you idiot, a bug! A listening device! Seriously, this Sam guy was the poorest excuse for a super-geek I’d ever met.

Libby made an awkward gesture with her hands. “I, uh, I guess we’d better go.”

Sam walked toward the door. “Probably for the best. I have a surprise planned for dinner.” He pressed two fingers against his lips, as if afraid his secret might slip out.

And then they left. Both still clueless about the bug. I flopped down on the floor with a sigh.

The only good thing? Sam didn’t even notice the mirror over the fireplace. A lesser man would have checked his reflection and smoothed down the hair that I’d messed up on purpose.

I had my doubts about his intelligence, but otherwise, this Sam guy just might do.

For now, I’d give him temporary approval and keep an eye on him.