Get an inside view into the thoughts of Bella, the lovable golden retriever whose former owner, Don Felding, said was the smartest dog in Dogwood Springs! 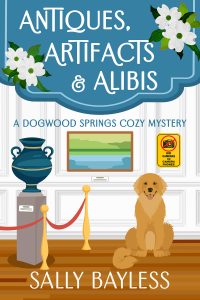 Bella and Libby Meet a Killer

The moment Terry stepped in from the hall with that gun, I realized Libby was in trouble. It was clear he was the perp, as Don used to call them when we watched his favorite cop shows together.

For a second, my paws froze to the floor. Then I lunged at the guy and growled, warning him to back away from Libby.

“If that dog bites me, I’ll…” Terry’s beady eyes narrowed, and he pointed the gun straight at me.

I growled louder. I’d seen his type on TV. Don always said they acted tough, but when the time came for action, a guy like this would hesitate. I could leap at Terry faster than he would pull that trigger.

I looked back at her.

When we watched those shows, Don didn’t just explain things to me. He also yelled instructions at the people on the TV, although they never seemed to obey. How many times had I heard Don yell at one of those TV cops to trust their partner? Dozens? Hundreds?

Enough to know that I should trust that Libby had a plan.

Honestly, though, I wanted to deal with this jerk myself. I moved in closer, eying his pant leg. It looked like some kind of microfiber I could bite right through and—

I growled once more at Terry, then slowly, begrudgingly, walked to Libby’s side.

She grabbed my collar, and I felt her hand shaking.

My tail drooped. If she was that nervous, she didn’t have a plan at all. She was just trying to protect me.

“Aren’t you two cute together?” Terry said in a tone that made me want to take a leak on his leg.

“How did you—” Libby drew in a raspy breath. “How did you get in here?”

Terry let out a sharp laugh. “Easy. You sent that email to the board saying you and Alice had the new key. My mother-in-law volunteers with Alice at the hospital, and she’s told me at least a dozen times that Alice is there every Friday.”

Okay, bozo. I might be a dog, but even I know that didn’t answer Libby’s question.

“Don’t look so confused,” the perp continued. “It’s simple. All the volunteers put their purses in the same locker. My mother-in-law’s car needed repairs a couple months ago, and she texted me the combination so I could get the keys out of her purse. I went to the hospital Friday afternoon, got the shiniest key on Alice’s key chain, and had a copy made out of town. I put it back before she even noticed.” He rolled his eyes. “Vivian had that recording incriminating me, and I knew she’d keep a physical copy. She only used the cloud for work because the board insisted. I’d already searched her house, so I had to look here. I spent the whole weekend going through her office.”

Libby’s hand shook even more. “You went through her—my—office?”

He let out a snort. “Yeah.” He glanced down at his wet dress shoes, and his mouth twisted into a scowl. “If I’d found what I’d been looking for, none of this would have been necessary.”

So, when Libby had carefully locked the doors at the museum, Terry had the key the whole time? Sometimes, it boggled my mind how sneaky and evil humans could be.

By now, Libby had to be coming up with a plan. Don would have been. Surely, she would too. She’d give me a sign, some kind of sign, and I’d know she was ready for me to act.

“Give me the flash drive,” Terry said.

“What flash drive?” Libby sounded not just scared but confused.

“Don’t play dumb. Last night at dinner, that flash drive was all my daughter could talk about. Some weird kid that her friend Gwen has a crush on told her you have a flash drive. That he’d been trying to figure out the password because it might have evidence about the killer.”

The perp had a child? They’d let this evil human breed?

“Fine. We never did figure it out. I’ll give you the flash drive, and we can forget this ever happened.” Libby’s voice wobbled, and I could tell she was lying.

Terry rolled his eyes. “How stupid do you think I am? You probably already copied the files, and you’ll give them to the cops.”

Yeah, apparently Terry could tell she was lying too.

His face shifted to an expression of mock pity. “Sadly, Miss Ballard, you’re the final loose end I need to tie up.”

This situation was really headed south. C’mon, Libby, come up with a plan. The cops on TV always had a plan.

“It won’t be hard,” Terry said. “I’ll make it look like you were here dealing with a plumbing problem when someone broke in, stole everything from that small jewelry display in the front room, and killed you in the process.”

“That jewelry isn’t worth more than $500,” Libby said. “I don’t think anybody would kill for it.”

“The thief wouldn’t know how much it was worth. And you won’t be around to mention it.” He raised the gun and pointed it straight at Libby.

Her hand shook even harder, and she gasped for air. If she didn’t do something in the next second, I was attacking the perp. I loved Libby dearly, but forget what Don said about trusting your partner. That was when your partner was a cop, when they had a plan, when—

Libby let go of my collar and tapped my shoulder as if… as if she did have a plan!

And I leapt into action.